Metaethics, Philosophy of Science, Social and Political Philosophy May 29, 2020 Leave a comment

From Haidt’s impassioned rejection of the “rationalist delusion,” it is difficult to discern why Schwitzgebel and Rust would place such significance on the aforementioned behaviors as they pertain to ethicists versus non-ethicists. There are more morally egregious behaviors that ethicists could engage in would serve to overwhelmingly confirm the fact that they do not act more morally than others despite their professional status as moral philosophers. Yet, in the various articles published by Schwitzgebel and Rust, very little explanation is provided as to why these are truly relevant to determining whether moral philosophers behave better than those who may not have as extensive training or education in moral reasoning. In an article about the library habits of ethicists versus their non-ethicist counterparts, there is only one sentence provided as to why failure to return library books is bad (Schwitzgebel 714). Rather than justifying their choice of moral behaviors to research, Schwitzgebel and Rust spend most of their published articles explaining the methods they use.

END_OF_DOCUMENT_TOKEN_TO_BE_REPLACED

A Summary of “The Righteous Mind” by J. Haidt

Metaethics, Morality and Ethics, Philosophy of Science, Social and Political Philosophy May 25, 2020 Leave a comment 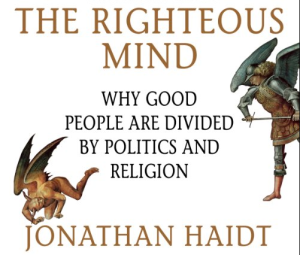 In his work “The Righteous Mind: Why Good People are Divided by Politics and Religion,” social psychologist Jonathan Haidt coins the term “the rationalist delusion” to explain a tendency of a majority of scholars to overemphasize the importance of rationality in human behavior throughout history (103). Haidt claims that the “worship of reason,” particularly within the realm of morality, is essentially inappropriate and he utilizes the rest of his book to advocate for a different version of moral reasoning and decision making processes based more on emotive intuitions that are dominant (103).